Christians Against the Odds 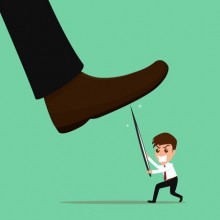 You are the underdog! And you will always be the underdog in this life and in this age. Does this surprise you?

Paul is saying, “don’t get carried away with yourself”. He reminds them what some of them were, before God called them from this world — fornicators, idolaters, adulterers, homosexuals, sodomites, thieves, covetous, drunkards, revilers and extortioners. In their deceived minds, they forgot that they were washed, sanctified and justified in the name of the Lord Jesus and by the Spirit of our God (I Cor. 6:9-11).

The Corinthians would certainly fit in the category of the 'weak of the world', and they needed to remember this.

Is there a reason God did it this way? Simple. Anyone who is righteous, that is, thinks they are righteous, would also think that God chose him/her because of their righteousness. “I have not come to call the righteous, but the sinner...”, Jesus would say. A righteous person (in his own eyes) is a person who doesn’t have to learn. They don’t have to strive to deal with their sin, or reconcile their past. God can’t give victory to these people. They already have it. They don’t really need God, as they would see it.

The poor and needy (as David saw himself) take nothing for granted. They are the underdog, and always will be in this life. David came to rely on God in a way that few people did, and he grew in wisdom and leadership. But he was the underdog when Samuel came to the family to anoint a new king. When he met Goliath on the battlefield, he was the underdog. When you read the Psalms which are David’s prayers, you see that his enemies were unrelenting and ever present. David knew how vulnerable and weak he was.

Let’s define the “underdog”. This is the person who is not expected to win. His or her opponents are stronger, better positioned, more skilled, and have a better winning record. Nobody bets on a person whose chances are they are going to lose. Nobody gave David any chance of defeating Goliath, until..... you will have to wait for the answer. It’s the same answer you need to look for.

Did you know that in so many contests, and this is true in sporting contests and in military battles, the underdog wins! The statistics show it. We are in a battle, and it is better to be the underdog. So many people, including us, misinterpret the world in which we live. We don’t see our time here as being engaged in a battle against a foe so much more powerful than us. His goal is to defeat us, and bring us into his dominion.

Why do you read of so many inspiring stories about people who had disadvantages in life who eventually do better than those we would consider to have no real disadvantages? The fact they had more to overcome is only part of the answer.

The story of David and Goliath is a normal part of our cultural history of western civilisation. Because of the underdog principle, Goliath is the person you didn’t want to put your money on. The Philistines made a big mistake. But, again, they believed the seemingly mighty would prevail.

You know, the devil actually thinks he is going to win. He won’t accept defeat. He thinks weak humans don’t have a chance of defeating him. So he will persevere to the end to win against God. He will marshal the nations to fight against Christ. It’s going to be a slaughter—read Revelation 19.