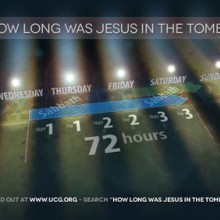 Good Friday is the day that the Christian world in general commemorates the death of Jesus on the Cross, and the resurrection of Jesus is celebrated on Easter Sunday.

The sign Jesus gave to the scribes and the Pharisees as recorded in Matthew 12:40 shows the fallacy of a Good Friday crucifixion and an Easter Sunday resurrection.

In Matthew 12:40 Jesus Christ plainly said He would be entombed for three days and three nights. Can this be reconciled with a "Good Friday" crucifixion and burial and an "Easter Sunday" resurrection, which allows for barely a day and a half in the tomb? Or do the Gospels spell out a surprising, simpler solution that fits perfectly with what Jesus foretold?

When Jesus was on earth speculation as to His real identity was a popular topic of conversation. But most of the religious leaders viewed Him as a threat to their position. One day a group of them challenged Him with a question: "Teacher, we want to see a sign from You" (Matthew 12:38).

The religious leaders were not seeking for truth, but were eager to trap Jesus in some way and hopefully prove Him to be a fraud. Jesus was fully aware of the motive behind this question and His reply is enlightening.

It was Jesus' way of saying that He would die, and remain dead for a specific period of time - and these two facts together would prove that He is the true Messiah. And to prove His identity to the religious leaders that He was indeed the Christ, He specified precisely the length of time He would remain dead, after which He would live again.

Three days and three nights comprise a total of 72 hours. Yet today it is almost universally believed that Jesus died and was buried on late Friday afternoon and was resurrected early Sunday morning.

If that belief is really true, then, based on His own words, the only sign of His Messiahship has utterly failed - for there are not three days and three nights between Friday afternoon and Sunday morning.

The True Chronology of Events

In the year Jesus was crucified, the Passover fell on a Wednesday with the first day of Unleavened Bread following on the next day, Thursday. Jesus died around 3:00 p.m. on Passover day, Wednesday afternoon.

"Now it was about the sixth hour [of daylight, corresponding to 12 noon], and there was darkness over all the earth until the ninth hour. Then the sun was darkened, and the veil of the temple was torn in two. And when Jesus had cried out with a loud voice, He said, 'Father, into Your hands I commit My spirit.' Having said this, He breathed His last" (Luke 23:44-46).

Between the ninth hour (3 p.m.) and sunset on Wednesday, Joseph of Arimathea and Nicodemus asked for permission to remove His body to wrap and put it in a tomb which was close by.

"After this, Joseph of Arimathea, being a disciple of Jesus, but secretly, for fear of the Jews, asked Pilate that he might take away the body of Jesus; and Pilate gave him permission. So he came and took the body of Jesus. And Nicodemus, who at first came to Jesus by night, also came, bringing a mixture of myrrh and aloes, about a hundred pounds."

"Then they took the body of Jesus, and bound it in strips of linen with the spices, as the custom of the Jews is to bury. Now in the place where He was crucified there was a garden, and in the garden a new tomb in which no one had yet been laid. So there they laid Jesus, because of the Jews' Preparation Day, for the tomb was nearby" (John 19:38-42; compare Luke 23:50-55).

The record in chapters 15 and 16 of Mark's Gospel confirms the account of Joseph of Arimathea being granted the body of Jesus by Pilate and, after wrapping His body in fine linen, he laid Jesus' body in the tomb and rolled a stone against its door.

We need now to note verse 47 of Mark 15 where reference is made of two Marys: "And Mary Magdalene and Mary the mother of Joses observed where He was laid."

As Wednesday evening was coming and Jesus' burial was completed, the two Marys noted where Jesus had been buried and they then paused the next day – Thursday - to observe the "high day" annual Sabbath beginning the Festival of Unleavened Bread. This annual Sabbath ended Thursday evening at sunset.

The next day, Friday, the two Marys went out and purchased more spices to add to the body of Christ and spent the rest of the day preparing them.

Mark 16:1: "Now when the Sabbath (the annual Sabbath – Thursday) was past, Mary Magdalene, Mary the mother of James, and Salome bought spices, that they might come and anoint Him".

They then rested on Saturday, the weekly Sabbath, before getting up early Sunday morning to go to the tomb to put the spices on His body.

In chapters 23:55 – 24:3 Luke writes: "And the women who had come with Him from Galilee followed after, and they observed the tomb and how His body was laid. Then they returned and prepared spices and fragrant oils. And they rested on the Sabbath according to the commandment."

"Now on the first day of the week, very early in the morning, they, and certain other women with them, came to the tomb bringing the spices which they had prepared. But they found the stone rolled away from the tomb. Then they went in and did not find the body of the Lord Jesus" (Luke 23:55-24:3).

The Truth of the Matter

Jesus Christ said He would be "three days and three nights in the heart of the earth" (Matthew 12:40). If He were buried in the late afternoon, then He must have been resurrected at around the same time three days and nights later.

He was placed in the tomb by Joseph of Arimathea in the late afternoon of Wednesday - just before the sun went down. Three days and three nights later would have been at approximately the same time of day, just as the sun went down and evening came.

This places Christ's resurrection on Saturday around sunset - not on Sunday morning! As we have already seen, when Mary went to the tomb "while it was still dark" on Sunday morning, He was already risen!

Christ was buried on Wednesday afternoon, very late, and raised from His grave around sunset three days and nights later. This perfectly fits with the three nights - Wednesday night, Thursday night and Friday night - and the three days - Thursday, Friday and Saturday. This is the only time that fits Jesus' own prediction of how long He would be in the tomb. And it fits perfectly with all the details recorded in the Gospels.

The sign was fulfilled, just as He said! The Son of Man was dead and His body lay for three days and three nights in the heart of the earth.

Much more additional proof that Jesus was not crucified on a Friday nor was He resurrected on a Sunday is published in our free booklet, Jesus Christ: The Real Story. We can send you a printed copy in the post, or you can access the booklet on our website.