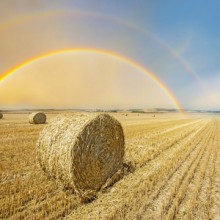 The heretics condemned the Colossian church for the manner in which the Colossians observed the Holy Days. Notice that they didn’t challenge the days themselves. It was the physical enjoyment of them — rejoicing and feasting — that provoked the objections of these false teachers... Paul was telling the Colossians to ignore these heretics’ judgments and criticisms about their enjoyment of the eating and drinking aspects of God’s festivals” (p.61).

These festivals have wonderful meaning and are a great joy to keep. These latter festivals are eagerly looked forward to by members of the United Church of God and will be soon upon us. If you would like to learn more about them please request or download our booklets Holidays or Holy Days: Does It Matter Which Days We Keep? and God’s Holy Day Plan: The Promise of Hope for All Mankind.

Holy Days — Such days must surely be just for the Jews, is a common conclusion. But - is it a correct one? "These are My feasts", proclaims God, in Leviticus 23:2, you shall observe them.

Why did God institute these Holy Days? What is their relevance to a Christian community whose major festivals are Christmas and Easter?