Many people assume that, apart from the Bible, history is silent concerning Jesus of Nazareth. 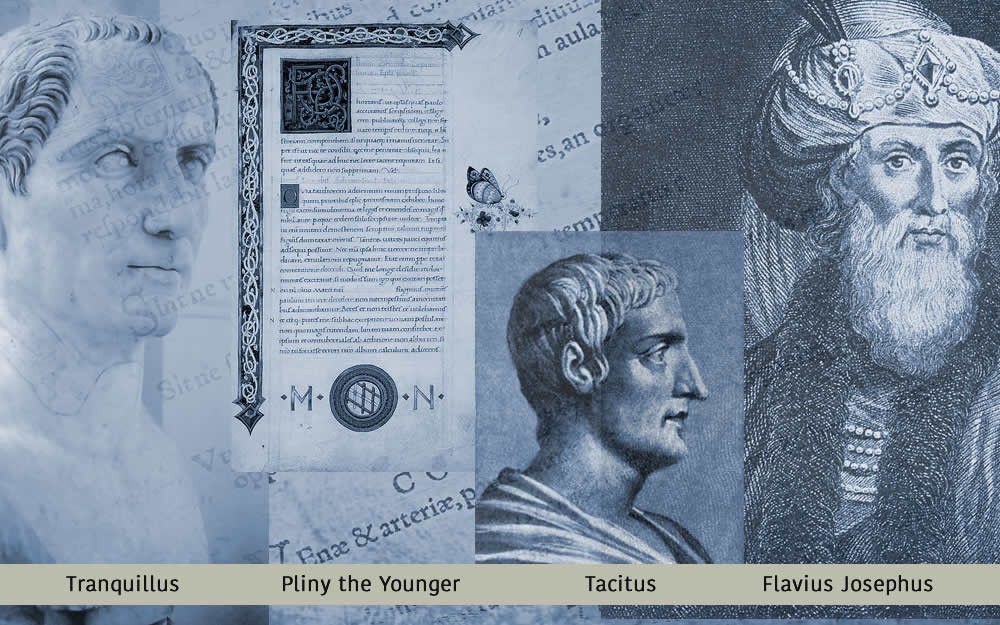 Testimony from the Romans

Cornelius Tacitus (ca. 56-120) was a Roman senator, consul and governor of the Roman province of Anatolia (covering most of modern-day Turkey) as well as one of ancient Rome’s greatest historians. Late in his life he wrote a 16-volume history of the Roman emperors, the Annals.

No friend to either Nero or Christians, Tacitus writes that Nero blamed “a class hated for their abominations, called Christians by the populace.” He goes on to explain that “Christus [Christ], from whom the name had its origin, suffered the extreme penalty [crucifixion] during the reign of Tiberius at the hand of one of our procurators, Pontius Pilatus, and a most mischievous superstition, thus checked for the moment, again broke out not only in Judaea, the first source of the evil, but even in Rome …” ( Annals, 15:44, quoted by Lee Strobel, The Case for Christ, 1998, p. 82).

A contemporary of Tacitus, Gaius Suetonius Tranquillus (ca. 69-140), overseer of Rome’s libraries and court official to several emperors, writes that the emperor Claudius “banished the Jews from Rome, who were continually making disturbances, Chrestus [Christ] being their leader” ( Lives of the First Twelve Caesars: Life of Claudius, quoted by Grant Jeffrey, Jesus: The Great Debate, 1999, p. 163). This banishment of Jews from Rome is mentioned in Acts 18:2.

Also, “Pliny the younger, the Roman legate of Bithynia-Pontus (what is now north-central Turkey) in the early second century, wrote to the emperor Trajan, requesting advice on how to deal with Christians who refused to reverence Caesar’s image. Pliny noted that these Christians met regularly and sang hymns ‘to Christ as if to a god’ ( Letters 10:96.7). The phrase ‘as if to a God’ suggests that Pliny knew Jesus had been a person who had lived on earth but was reluctant to call him divine” (Craig Blomberg, The Historical Reliability of the Gospels, 1987, p. 196).

From these historical sources, none connected in any way with the Bible, we see references to these facts:

Flavius Josephus, a prominent Jewish historian of the first century, is well known to historians and scholars. Born into a priestly family in A.D. 37, Josephus was well educated and commanded a Jewish detachment in Galilee during the Jewish revolt of 66-70 until his capture by the Romans. At the end of the war he went to Rome with the Roman general Titus, where he lived and wrote until his death about A.D. 100.

Josephus twice mentions Jesus in his monumental work Antiquities of the Jews, written A.D. 90-95. His most extensive quote reads:

“Now, there was about this time Jesus, a wise man, if it be lawful to call him a man, for he was a doer of wonderful works,—a teacher of such men as received the truth with pleasure. He drew over to him both many of the Jews, and many of the Gentiles. He was [the] Christ; and when Pilate, at the suggestion of the principal men amongst us, had condemned him to the cross, those that loved him at the first did not forsake him, for he appeared to them alive again the third day, as the divine prophets had foretold these and ten thousand other wonderful things concerning him; and the tribe of Christians, so named from him, are not extinct at this day” ( Antiquities,Book 18, chapter 3, section 3).

While many scholars dispute parts or all of the passage, it is quoted as above by the historian Eusebius as early as 315.

A second mention of Jesus by Josephus is seldom disputed by scholars. It concerns the martyrdom of James, His half brother: “Festus was now dead, and Albinus was but upon the road; so he assembled the sanhedrin of the judges, and brought before them the brother of Jesus, who was called Christ, whose name was James, and some others [or some of his companions;] and when he had formed an accusation against them as breakers of the law, he delivered them to be stoned …” ( Antiquities, 20:9:1).

Another prominent figure from the Gospels mentioned by Josephus is John the Baptizer: “Herod, who feared lest the great influence John had over the people might put it into his power and inclination to raise a rebellion,…thought it best, by putting him to death, to prevent any mischief he might cause…Accordingly he was sent a prisoner, out of Herod’s suspicious temper, to Macherus,…and was there put to death” ( Antiquities, 18:5:2).

Although Josephus was never a Christian, in his works we find mention of many other figures from the Gospels and other New Testament books. These include the family of the Herods; the Judean procurators and members of the high priestly families. His books, like the writings of the Roman historians and officials, provide powerful independent corroboration of the historical accuracy of the Gospels and the existence of Jesus Christ.